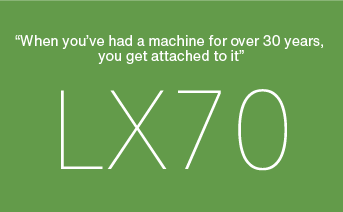 Established in 1971 and soon to celebrate its 50th anniversary, Amano Industry's history runs parallel with and overlaps that of Hitachi Construction Machinery (HCM) which was established in 1970. "My father, who is our advisor, loves heavy machinery. He always gets on the machine himself and finds bits he wants to modify. He isn't a designer, so he used to get HCM to give shape to his ideas." Says Hisanobu Amano, President and Managing Director. After building a career as a designer in the construction industry, he took over managing the company from the founder and current chairman.
Amano Industry excels at pile driving work by using low overhead clearance excavators at sites where either space is confined or overhead clearance restrictions are imposed. When working for their main client, a railway company, this is often carried out at sites that have many constraints. These could could be a narrow road next to a railway track or an underpass, where a 3-point support-type pile driver cannot be used. To navigate under such constraints, the company acquired HCM's hydraulic foundation machines (RX2000, RX2300 and RX3300). By applying its own advanced technological capabilities, the company was not only able to work with the constraints on site, but also dramatically boost the material handling efficiency of the machines and workforce. "It must have been hard because they were making something that didn't exist, but thanks to HCM's response, our ideas merged." said President Amano.

At the company's equipment center is an LX70 wheel loader, which has been faithfully used for over 30 years. Originally used for transporting earth and construction waste at the railway company's construction site, the machine's current role is mainly clearing Hokkaido's heavy snow. More snow accumulates in the huge yard of the company's equipment center in winter than can be cleared by manpower alone. Over the years the machine has shoveled vast amounts of snow to keep the yard clear for the big machines that come and go. Perhaps in recognition of this achievement, Amano Industry introduced the LX70-7, a later model of the same machine. Managing Director Minoru Kawamura had this to say about the machine's evolution. "The torque has been improved, making the machine that much more powerful. To collect all the snow that accumulates in a yard this size, the machine needs pushing force. It feels more dependable than the first model."
The LX70 is still in active service, working just as dynamically as the 70-7. Due to its ease of use, it was used as President Amano's training machine when he acquired a qualification in skill in operating vehicle type construction machines. "When you've had a machine for over 30 years, you get attached to it." said Amano. The machine is painted regularly and is kept in such good condition that it could be mistaken for a new one.

Never say something is "impossible"

Amano Industry adheres to the principle that "we do what other companies don't." Leveraging its pile driving technology, the company looks for new ways to be ahead instead of running alongside other companies. "Doing something different to other companies is quite a challenge, but without a spirit of challenge, it's impossible to open up new paths." said Amano. This way of thinking is entrenched in the company's strategy and how they handle challenging demands that other companies would reject. "All our staff as well as Mr. Kawamura never say something is "impossible". They continuously look for ways of how something can be done. It has been this way since the time of my predecessor." said Amano.
President Amano has complete confidence his Managing Director, Kawamura, and leaves all the civil engineering works to him. Kawamura, a construction machinery specialist whose career in the field extends over more than 40 years, has used HCM products continuously right from the U106 mechanical excavator. "My father used to operate heavy machinery and he drilled it into me that 'operators must never stop work at the site.' In short, it's a question of trusting your workers on site. If a machine breaks down, it is fixed at night. Trust earned in this way is immense." according to Kawamura.

When asked what was the most difficult job he had ever had to do, Managing Director Kawamura's reply was the underground passage construction in central Sapporo. The piles had to be driven in Sapporo's main street amid a maze of gas pipes, water pipes and optic cables. The instant a pipe was touched, no matter how slightly, there was a risk of shutting down the functions of the prefectural capital. In such a situation, the earth auger had to dig holes in very narrow space between the screw and the pipes.
"I might say that something can't be done as is, but I never say that something is impossible. I make sure the other party understands my reasons for saying why it can't be done. Then I ask for certain preparations to be made and take responsibility for getting the job done from there on." said Managing Director Kawamura. It is Amano Industry's policy to pursue and propose a possible solution.
President Amano always instills in every site worker the awareness that "every engineer is a salesman." This does not mean they are asking for work, but they address the assigned task with every effort and carry out the work to perfection. He believes that this is the ultimate sales activity and always leads to appreciation. In fact, it is said that there are many civil engineering jobs in Hokkaido that can only be handled by Amano Industry. Because of this, their competitors also refer potential customers to Amano Industry.

Photos of memorable work sites hang in the company

Managing Director Kawamura, praised by President Amano as "more of an idea man than the chairman," has such a fierce passion for construction machines that he designs attachments himself and develops new construction methods. Looking back on his association with HCM for over 40 years, he says, "During the period of high economic growth, a time when mainstream excavators were transitioning from mechanical to hydraulic machines and manufacturers were engaged in a process of trial and error, it was HCM that paid most attention to feedback from users. Its mindset was progressive, its iron materials were strong, and its mechanics were skilled. Overall the company was well balanced." He feels, however, that this balance has become somewhat distorted.
"There's a decline in craftmanship amongst young people nowadays. In the past, if a machine broke down on site, the HCM rep was informed by phone, he would envisage the repair process in his head and tell us which procedures to take. There are not so many people who can do that nowadays and also few operators who can respond accordingly." said Managing Director Kawamura.
Even now, a call from Mr. Kawamura to the sales rep at the Sapporo Branch Office will lead to an exchange of technical ideas lasting over an hour. The conversation does not stay on a single track; it diverges repeatedly before eventually reaching a goal. "An order might be made easily, but there is also the matter of warranty, so I can understand if the manufacturer says, 'No, we can't do that.' It's important to clarify why it can't be done and the grounds for rejection. We move in the direction of persuading the manufacturer while discussing how it can be done. When all the issues have been cleared, the end result is an excellent product. We want HCM to go on being a manufacturer that we can consult and we want to see HCM evolve even more." said Kawamura. HCM can definitely do it and that conviction leads Managing Director Kawamura to sometimes make sharp comments. Apparently, the HCM rep was faltering and hesitant when he first took up the post, but now they are well enough acquainted for him to sometimes express his opinion to Kawamura. "Well, I find it frustrating too to be questioned all the time, so in the end I answer back (laughs)." said Kawamura.
If you say "No, it can't be done," then that's it, the end. But if you go on looking for solutions, then you surely can achieve your goal. The path of technical progress is one filled with wanting to satisfy user's needs.

The LX70 remains nearly perfect, despite having been operating for more than 30 years. Minoru Kawamura always checks the condition of their machines.