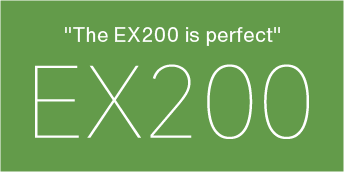 Hitachi excavators are easy to operate

Karibe Construction first began using Hitachi Construction Machinery (HCM) products in 1985. Before Japan's economic bubble, the company purchased a UH025-7 (equipped with front attachment for ditch excavation) for road excavation work. President Yoshimi Karibe reflects back on that time. "In those days, unlike the swing-type hydraulic excavators available from other manufacturers, the UH025-7 was groundbreaking in its ability to move the arm from side to side while the machine faced forward, so that ditch excavation work could be performed next to a wall or fence."
After the UH025-7, Karibe Construction continued to purchase HCM products. Yoshimi Karibe offered particularly high praise for the EX60UR and EX200. "Honestly, HCM machinery at the time was either hit or miss. But the EX60UR and EX200 are perfect. They always operate exactly as you want, whether you are moving or stopping. The operability of these excavators is excellent." said Karibe.
In road excavation work, cycle time is important - how quickly can the excavated material be loaded and dumped. The free and smooth operation of HCM hydraulic excavators played a very useful role in situations where a difference of five minutes per cycle can affect company profits. "Particularly when there was a high volume of traffic, we would switch from using 0.7 m3 buckets to 0.9 m3 buckets in order to improve working efficiency. Even so, the balance remained steady. Sometimes when we use rental machines manufactured by other companies, there is a different level of physical fatigue afterward. Whether operating the bucket, raising the cylinder, or swinging, the subtle variations in hydraulic balance and the ease of use make a huge difference." said Karibe.
Naoki Karibe, who serves as Executive Director at Karibe Construction, discussed the ride quality of HCM products. "When I operate hydraulic excavators from other manufacturers, it doesn't feel so stable. In contrast, HCM machines feel sturdy and stable."
Karibe Construction still uses the EX200 at a material storage site. With operational movement that compares favorably even to the latest hydraulic excavators, the machine is still in active operation. "Although the EX200 has not been out for a while, it is still sufficiently capable of performing work. It is always ready to be taken to a worksite if necessary." said Yoshimi Karibe.

For machines, simple is good

We asked President Karibe, who has used HCM products for many years, if he had any suggestions for improvements. "Compared to machines in the past, the recent models have certainly evolved. However, I think a little more simplicity would be a good thing." Karibe said. The evolution of functions has led to an increasing number of operations that are more difficult to understand, particularly for the older staff. One one occasion, Executive Director Karibe observed a construction machine moving awkwardly at a worksite. When the operator was questioned, he said that the numerous buttons made the machine difficult to operate.
"As operators become more experienced, they tend to rely less on the functions and more on their own senses. This also enables them to quickly discover any problem e that occurs. If, for example, HCM offered not only a model that was fully equipped with all the functions, but also a cheaper model with basic functions and the same level of work performance, I think there would be a surprising amount of demand. It's all about choice." said Naoki Karibe.
One reason for President Karibe's suggestion is his concern that the extensive functions also create a bottleneck for improving the skills of younger operators. Even though the machinery is easier to operate, he suggests that operators may lose their skills if they rely too heavily on the functions. If, for some reason, an operator encounters a situation where a particular function is not available, how can the operator handle the situation without the required skills? Also, if the manufacturer assumes some of the responsibility, how can they educate operators to ensure the required skills? This balance between functions and skills may become an issue for the construction machinery industry in the future.
"It is good to have a wide range of functions, but I would also like to see efforts to strengthen basic parts such as cylinders, hydraulic hoses, and pins. The small, hidden parts are even more important than flashy parts. For the users who actually operate the machine, that is what is most important." said Karibe.

Refusing to lose to competitors

President Karibe always encourages his employees to treat each worksite as if they are tending their own garden. If you let another person take care of your own garden, how would you feel if they did a careless job? Karibe Construction strives to maintain a high level of awareness and work carefully at every site.
"There are a many different ways of working in the construction industry, and we absolutely refuse to lose to our competitors who use construction machinery like we do."said Executive Director Karibe. This awareness is evident not only in the care that they devote to their work, but also in their speed. The company completes their work safely and quickly, while keeping a high level of concentration focused on the site.
"In this way, if we increase the amount of work and boost our income, we can give back to our employees through bonuses and salaries. Although we are a small company, I want to show them that we can achieve strong results if we work hard." said President Karibe. With a marketing style that is not focused on selling themselves, the company maintains a steady amount of business thanks to the reputation they've gained from their job performance.

Double advertising signs held up by the user

President Karibe has a deep affection for each individual construction machine that the company owns. When a new machine is delivered, he climbs aboard and checks the operability and stability for himself. This appreciation for machinery at Karibe Construction is evident in the careful attention devoted to keeping the exterior clean, so that when a machine becomes slightly dirty or scratched, it is cleaned up immediately. "If a machine becomes dirty or scratched, it can cause the operator to become sloppy. The quality of work decreases, and accidents become more likely to occur. By using machines that are always clean, the operators stay sharp." said Karibe. "If we scratch a machine, we immediately contact HCM the same day. We do this to set a good example for our employees." added Naoki Karibe.
In addition to maintenance, Karibe Construction also periodically requests HCM to fully repaint the machines. This comes at considerable cost. Although repainting a machine does not improve its performance, there is a reason for it, according to Naoki Karibe. "When I see a different construction company performing road works, my attention is drawn to the construction machinery. In my view, a company that keeps their machines clean also takes great care in their work. Passersby also pay more attention to machinery than you might expect. Therefore, construction machines are like advertising signs for the company. In our case, they are advertising signs for both Karibe Construction and HCM."And, the HITACHI logo is boosted by users all around the world.

The region around Shimotsuma City, where Karibe Construction is based, is one of the premier rice-growing areas on the Kanto Plain. As a future prospect, Karibe Construction has set its sights on agricultural engineering works that utilize ICT construction machinery.
As farmers continue to decrease in number and increase in age, there is growing interest among the younger generation regarding agricultural land ownership system. This offers opportunities for individuals to manage land and grow crops such as rice. Karibe Construction is developing a new business concept in which ICT construction machines for civil engineering are used to prepare plots of land and tractors are contracted out for operations such as leveling work. "It is difficult to imagine the disappearance of agriculture in the future, even if there is a decrease in public works. Over the long term, we hope that ICT construction machinery can lead to opening up new types of business." said Naoki Karibe.
Since its origin, Karibe Construction has been involved not only in civil engineering and construction, but also in agriculture. The company continues to operate farms today, with rice as their main product, as well as white corn and green onions. Their products are sold in the surrounding area at roadside stations and large-scale shopping malls. The rice, which President Karibe is directly involved in growing, is available in a variety of package sizes, including small packets. Their taste-testing sets, which include three different types rice, are a popular choice for gifts or complimentary giveaways at events.

The EX200 still operates at the material storing site. Treated with care and well-maintained, it keeps the same performance from when it was new, over 30 years prior.