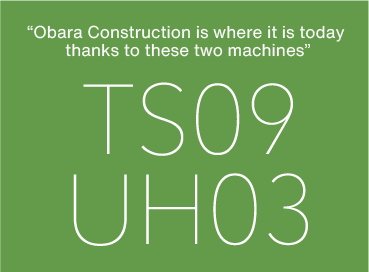 A highly unique machine that is almost nonexistent in Japan today

The two vintage machines that supported Obara Construction through its early years have been overhauled and are displayed in front of the office building. President Shiro Obara and Chairman Mitsuo Obara have many nostalgic memories. "In those days, no manufacturer would sell machines to a small company like us on an installment basis. HCM was the only company bold enough to sell us new machines in installments." said Shiro Obara. "Obara Construction is where it is today because HCM's machines brought in revenue" added Mitsuo Obara.
The company's first machine was a TS09 tractor shovel equipped with a unique Hitachi engine that is almost nonexistent in Japan today. Introduced in 1967 through the Iwate Construction Industry Modernization Fund, it played an important role in the construction of Hachimantai Toll Road, Sanriku Jukan Railway line between Ube and Noda in Kuji City, Senmaya River floodgates and other construction works. Seiichi Ishikawa, a former employee who at one time operated the machine's control levers, praised the TS09's robustness. "I was using the machine almost every day under harsh conditions, but it never suffered a major breakdown. Regardless of the job, it was a tough machine." said Ishikawa.

The second vintage machine is a UH03 the company purchased in 1975 to replace the TS09. The UH03 is the first hydraulic excavator to be completely developed with Japanese technology and is registered on the Mechanical Engineering Heritage list. Of the initial UH03 machines, only two exist in Japan, this one and the one on display at HCM's Tsuchiura Works. As Obara Construction was mainly engaged in farmland development at the time, introduction of chain-operated HCM products was deferred due to their unsuitability to muddy construction sites. However, the UH03 turned that norm on its head. Junichi Saito, Ishikawa's former coworker and fellow machine operator, praised the mobility of the UH03, saying, "Mud was no obstacle to getting on with the work. You could operate the machine as you pleased, just like a car." The company's construction machines were nearly all products of other manufacturers, but acquisition of the UH03 marked the start of a gradual shift to HCM products.
President Obara rating of Hitachi machines are as follows: "They aren't showy or fancy, but rather simple and easy to use. They move as though they are substituting a human hand. The construction industry is what it is today because of the way heavy machinery has evolved. Saying thank you is usually comes second, but HCM really has achieved a great deal." said President Obara.

Obara Construction, the first company in Iwate Prefecture to purchase ICT construction machinery, holds an annual ICT training course for all its employees. Executive Director Manabu Obara explains the reason for this. "Our primary goal is work safety and labor efficiency. We introduced ICT machines in the hope of easing the workload of on-site employees." That goal is linked with the introduction of the TS09 and UH03 by the Chairman and President. Ever since the company was founded, Obara Construction's stance has been to try to relieve the burden on employees by introducing new machines and processes, regardless of the cost.

Executive Director Obara described how the utilization of ICT construction machines has enhanced the value of skilled operators. "Skilled operators operate their machines while envisaging the finished work. If the ICT machine draws up the vision, the operator can bring a higher degree of perfection to the finished work. With the machine supporting his imagination, the range of things he can do expands greatly. That is the significance of introducing ICT." said Obara. The company held a joint ICT construction machinery tour with HCM in 2018. As an advanced ICT company, it is the driving force of growth in the local construction industry.

9 years since the earthquake

The Great East Japan Earthquake occurred on 11 March 2011. President Obara can still recall the scene he witnessed that day. "Everything was engulfed by the tsunami so you had no idea where the road was and the area around the foot of the mountains was totally burnt out. It was such a shocking scene that it was hard to imagine that just a short while earlier people had been living there." said Obara.
Obara Construction was one of the first on the scene after the earthquake and it has continued to support the area's recovery for almost 10 years. One such project is construction of Sanriku Coastal Road (a reconstruction road) to restore the national road along the Pacific Coast that was swept away in places by the tsunami. It connects the expressway from Rikuzentakata at the southern end of Iwate Prefecture to Hirono at the northern end.
Several construction companies, some from as far away as Nagoya and Kyoto, came to help. "At some point, our employees, as well as everyone else involved in building the road, will definitely take pride in this experience," said President Obara. He told everyone involved that he wants them to come back with their loved ones to see the landscape when the road is finished.
The narration for Obara Construction's TV commercial contains the following passage. "When you stand alone at a completed jobsite, at that precise moment, you are rewarded for all your hard work. This is monozukuri (manufacturing) that will remain in the future." The entire Sanriku Coastal Road is scheduled to open in 2020. Even now Obara Construction employees are working hard at the jobsite.

Monozukuri that will remain in the future

Obara Construction has for some time actively spearheaded efforts in the industry to introduce work-style reforms. The company uses ICT technology internally and not only in connection with construction machinery. It is promoting work efficiency by introducing a 5-day week, participation of women at construction sites, teamwork by flexible workspaces and organizing internal information using a file-sharing app. Such activities embody Executive Director Obara's strong desire to improve the overall image of the industry.
Before joining the company, Executive Director Obara was a civil servant working in Kasumigaseki. Looking back on that time, he says, "I came back to take over the company, but 20 or so years ago this kind of work was looked down upon... To be honest, I didn't think it was a very cool job myself." This sentiment changed by reconstruction work after the Great East Japan Earthquake. "I realized that the world needed our work." said Obara. Since then, the company has taken various measures to enhance the overall image of the industry and improve work styles for the employees. The TV commercial mentioned earlier is one such measure. "First, I wanted management to convey to every worker how valuable their work is." added Obara. This sentiment was embodied in the copywriting, 'This is monozukuri that will remain in the future.' "I think that successfully running a company means that when the employees look back on their lives, they are glad that they worked for us. I want to be able to boast to my children and grandchildren that I made Obara Construction into the fine company that it is today. To do that, we must keep the company going."

ZX200LC at work at intermediate treatment plant for industrial waste

Obara Construction actively hires new graduates and develops human resources under the slogan 'Training Real Engineers.' "Young people today seek stability and many want to be civil servants or work for major construction companies. That is why we train real engineers who can fulfil their role anywhere. That will bring them stability in the future, " says Executive Director Obara. He wants the company to go on supporting the region, putting the employees first and not seeking to grow in size.
Kitakami City is pursuing new development through constructing a factory of a major company, among others. There is no end to Obara Construction's monozukuri that will remain in the future.

The colors of the TS09 and UH03 were faithfully restored based on the catalogs of those days. In particular, the Hitachi- made engine mounted on the TS09 is an ultra-rare item that rarely remains in Japan.